Palloncino Prosecco – The taste of Summer

Palloncino Prosecco – The taste of Summer

We have just received in an exciting new wine from the From Sunday Winemakers. The Palloncino Prosecco is our go to summer refresher.

Translated from Italian and aptly named after the ‘bang or pop’ of a balloon; this bubbly little number is festive and fun, perfect for spritzes or just popping it’s seal and set to ‘thirst-quench’ mode.

A selected clone from Northern Italy planted in Murray Darling, NSW, the fruit promotes a wine of crisp and delicious liquid refreshment!

#ProudlyMurrayDarling whilst the region shares similar practices and properties to that of northern Italy. Vine training, high density and allowing the vine to flourish with uniformed & abundant sunlight intersection improves optimal photosynthesis allowing Mediterranean varietals to truly thrive. Alongside deep sandy loam soils, the vines are irrigated from fresh and pure waters of the Murray River destined to retain freshness and a clean expression of the Glera varietal. 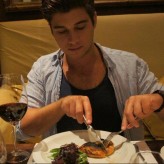